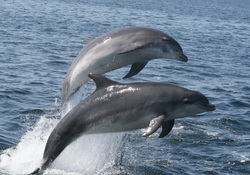 As the only known resident population of bottlenose dolphins in the North Sea, the Moray Firth Dolphins are particularly special. They also happen to be the World's biggest bottlenose dolphins, as they have extra layers of blubber and shorter extremities to help them cope with the cold Scottish waters. With a population of approximately 190 individuals these majestic mammals are often seen in pods, leaping and feeding in the inner firth.
Photo: Alan Airey 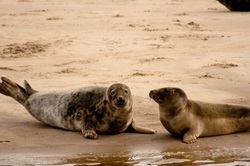 The Moray Firth is home to both Harbour seals, and Grey seals. Most commonly seen hauled out on sand banks at various points along the firth, seals are highly adapted for life in the North sea, with streamlined bodies, a thick layer of blubber, and small webbed flippers. They predominantly eat fish, the species depends on what is available, but most important are flat fish, such as plaice, and round fish, like sandeels. These seals spend much of their time at sea, but come ashore to have their pups. Common seal pups are born in June and July, while Grey seals are born in October and November.
Photo: Pippa Low 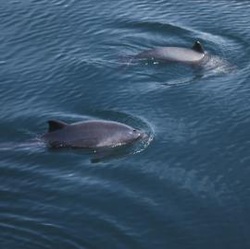 As the name implies, Harbour Porpoise are mostly seen close to coastal areas and estuaries, primarily feeding on small pelagic schooling fish . They are one of the smallest of the marine mammals, however are often mistaken for their larger cousins- Bottlenose dolphins. Less surface active than the dolphin, the harbour porpoise is usually not seen leaping out of the water or approaching boats. Because of their infrequent surface activity, not a lot is known about the harbour porpoise, but they are believed to be solitary animals, travelling alone, or in small groups, and reside in one area for their entire lifespan. 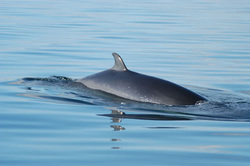 Predominantly a summer visitor, between May and September, the Minke Whale is the second smallest baleen whale growing up to 10 metres in length. These whales are black/grey in colour, with a distinctive white band on their pectoral fins. The length of the back, dorsal fin and blow are seen instantly once the whale surfaces, and they are often seen lunging at the surface whilst feeding on crustaceans, plankton and small schooling fish. 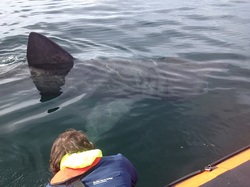 Another summer visitor to the area, Basking sharks are the World's 2nd largest shark (and fish!) on earth! They can grow up to be over 12 metres long, but are on average are 6-8 metres long. They are filter feeders, meaning the predominantly eat plankton and jellyfish and there mouths can be up to a metre wide!

Seabirds of the Moray Firth 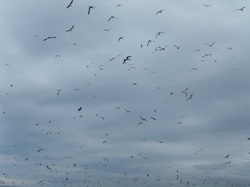 The cliffs of the Moray Firth have the largest mainland seabird colonies and are some of Britain and Europe's most important sites for seabirds. Some of the most significant areas in the Firth include; Troup Head, the only Gannet breeding colony on mainland Scotland, and North Sutor, the second largest Cormorant colony in Scotland, and the inner firth which is recognised as the most important seaduck site in the British Isles. Common species seen in the area include Puffin, Guillemot, Black Guillemot, Razorbill, Shag, Cormorant, Fulmar, Kittiwake, Oyster Catcher, Black Backed Gull, Eider Duck, Heron, Osprey, Buzzard, and Geese. 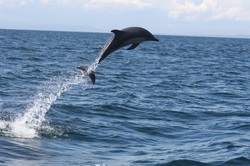 Unlike the name suggests, these dolphins are not very common here in the Moray Firth, however they are very widely distributed throughout the World. Smaller than our local bottlenose dolphins, the Common dolphin grows to be between 2-2.5 metres in length and have a very distinct hour glass pattern on the side of their bodies. We do not see them too often, however when we do; they always put on a show! 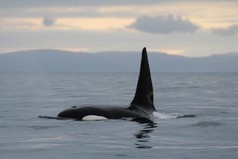 Another occasional visitor are the Orca, seen only three times in the Moray Firth since 2013. This iconic animal are the largest members of the Dolphin family, with males growing up to 8 metres long!
North 58 Sea Adventures - Findhorn Marina - Moray - IV36 3YE - 01309690099 - adventure@north58.co.uk
T&C's