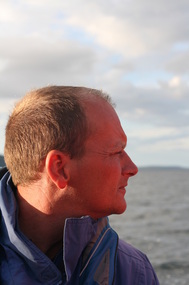 Simon has spent much of his life on the waters of the Moray Firth.
Owner and operator of Findhorn Marina, along with his wife Katrina, he is kept busy as an RYA Powerboat trainer and advanced commercial powerboat driver.

Simon is the Chief Coxswain and founder of Moray Inshore Rescue Organisation (MIRO), a private marine rescue service with a volunteer crew and specialist sea survival equipment monitored by the Maritime and Coastguard Agency.

After taking over North 58° Sea Adventures from it's previous owners, in late 2012, Simon set up a new home for the business and 'Buchaneer' at Findhorn Marina, offering locals and visitors alike the opportunity to explore the Moray Firth. 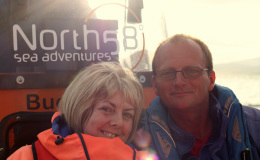 Much preferring to keep her feet on dry land, you will find Katrina running the Marina, the voice on the phone and the face at the counter.
Katrina always has a smile on her face whether she is helping you suit up in your waterproofs and life jackets before your trip or booking you on your next North 58° Sea Adventure!

Pippa lives to be near the water. She has been a Findhorn local all her life.
As a marine biologist, sailing instructor, divemaster and advanced commercial powerboat driver she loves spending all day on, in or under the water.
Following graduation from Stirling University, Pippa moved to Australia to take part in marine research projects.
After returning to Scotland in late 2012, she took on the role of Operations manager for the company, and loves talking about and showing the passengers all the local wildlife that can be found in the Moray Firth.

Felicity has graduated with a Masters in Marine Biology from the University of Southampton, during which time she gained her mmo certificate, advanced scuba diving and commercial advanced powerboat qualifications.

​Felicity loves working as a Skipper for North 58° and spending all day on the water with Moray Firth's amazing wildlife. She also has previous experience working in marine mammal research mainly stationed in New Zealand.

​Eilish is originally from New Zealand, where she completed her degree in Marine Biology from the University of Auckland. She has lived in Findhorn now for 3 seasons, gaining her commercial powerboat qualifications, and loves working as a skipper for North 58˚.

​She has previous experience working with marine mammals in New Zealand, has her Advanced PADI diving license, and is a qualified marine mammal medic. She is currently also working towards her Masters in Marine Biology in Germany.

Known as ​Boonie, he  is a volunteer for British Divers Marine Life Rescue, where as a Marine Mammal Medic he  helps in the rescue of seals, whales, dolphins and porpoise. He is also a member of the highly trained Large Whale Disentanglement Team.

Boonie runs a small seal unit from his home, where pups come to get treatment prior to being transported to rehabilitation centres. He loves working on the water, and is excited to work with North 58˚ and share the beautiful scenery and wildlife along the Moray Firth.

​Mark, known as Misty, has lived in Lossiemouth for over 18 years. Misty was in the RAF as an Air Traffic Controller for over 28 years and is still in the RAF Reserves. While in the RAF he learnt to scuba dive. Diving became his passion, and during 32 years he has done well over 2500 dives across the world as both a Supervisor and Instructor.
​
The Moray Coast and its wildlife area keen interest of his and he is hoping to bring his enthusiasm to the tours. He is looking forward to taking an active role with the 2019 season and hopefully beyond.

​Adele, known locally as dolphin Del, was born and brought up on the Moray Firth, and has always been drawn to the sea. She is a volunteer shorewatcher for WDC with many land and sea-based experiences. Residing in Burghead with a sea view, she decided to start her Dolphin Del Facebook Page to share her frequent dolphin sightings, and the page has gained a huge following. Joining the North 58˚ team is a dream come true and she is very much looking forward to sharing the abundant and exciting wildlife that this coast has to offer with the public.
North 58 Sea Adventures - Findhorn Marina - Moray - IV36 3YE - 01309690099 - adventure@north58.co.uk
T&C's